Completing his A Levels, second year Apprentice Jack Ellam knew he wanted to pursue a career in engineering.  So, when he decided to start his career as an Apprentice at Bri-Stor Systems he knew his career was on the right path.  “I loved watching the Big Bang Theory on TV and I absolutely loved maths and science at school but as I completed my A Levels, I was really starting to question the idea of university.  I love engineering and building things, even as a kid I was always playing Lego, but as I got closer to applying to university, I took the big decision to crack on with my career by joining an Apprenticeship.”

With fantastic results at school, Jack had the pick of Apprenticeship Schemes, but was really wedded to the Bri-Stor Group from the get go, as he tells us: “Through family friends I’d heard really positive things about Bri-Stor.  To be honest, I wasn’t excited initially about joining a family-run business but when I visited the business on an Open Day I was blown away.  The scale of the business is something else and the Apprenticeship Manager is a top guy – he’s ex-military so he doesn’t take any mucking about but the entire Scheme is a fantastic balance of learning, hands-on experience and personal development through team building exercises.  I’m incredibly proud to wear my Bri-Stor Apprentice sweatshirt – I’d recommend this Scheme to any student looking for a professional Apprenticeship Scheme that allows you to really stand out as an individual.”

Jack and the other second year Apprentices have had to adapt quickly to the new COVID working environment but it hasn’t tainted their experience of being a Bri-Stor Apprentice, Jack continues: “It’s been a weird year for sure and we’ve really had to modify the way we work to maintain social distancing, that said the Bri-Stor team has worked really hard to minimise the impact on our learning opportunities.  We’re doing less group work but we’re still sticking to the rotation and getting the opportunities to try new things and learn new skills.  This week I’m working on a prototype for a vehicle electric system; it’s really rewarding and it’s also a skill I can take outside of work.  I love fettling with cars and while my mates are all fiddling about for days with speaker systems, I’ve got it nailed in a fraction of the time.”

Many of Jack’s mates are at university and we wondered if he missed that opportunity?  Jack tells us: “Absolutely not.  The thought of all that debt and then having to try and get a job is a real nightmare.  Bottom line, I’ve got the structure of a job with the safety of learning.  I’d say to anybody looking at the Apprenticeship at Bri-Stor – just go for it, you’ll achieve so much more and for me, I’ll achieve my ambitions so much faster.”

Would you recommend the Bri-Stor Systems Apprenticeship? “Whatever career ambitions you have, this is for you – it’s professional but it’s also really varied.  It’s not an easy ride and you’ll have to graft like you never have before, but it’ll equip you with the skills for a superb career.” 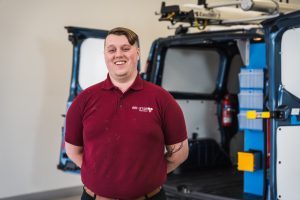 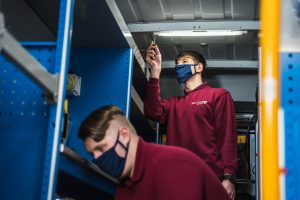 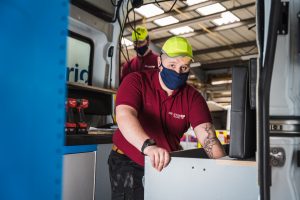